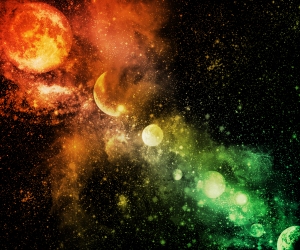 Is it worthy of the Christian to fear or oppose scientific books? Is there not an agreement between science and the Holy Bible?  Have the new scientific discoveries  succeeded in depriving the Christian individual of his ability to combine faith and this enlightened age of science?

This is the first proof of the existence  of  God,  and  it is a broad, inclusive and profound proof which is difficult to probe in a short article such as this. But it is sufficient to quote a statement in one of the scientific books that attacked the Holy Bible.  After the author had presented numerous explanations for the evolution of the earth, he says: “Our galaxy is an insignificant part of this universe which was probably in existence millions and millions of years ago.  Some advance has been made in the attempt to describe how and when the sun and the nine planets developed.”

“The study of the solar system gives us at least a clue about the development of this part of this universe that we live on, which is the earth.  The generally accepted explanation at present is that view which assumes that our solar system was born of the sun as a result of the proximity of a huge star which removed from the sun, through the effect of the law of gravity, huge masses of burning gasses.  These gradually cooled and coalesced to become planets which continue to revolve around the sun perpetually.  Thus the earth achieved its present state extremely slowly.”

Let us analyse together what we have just read.  Notice what is in bold letters, ” maybe, some advance, an attempt to explain, at least a clue, the generally accepted explanation, the theory, which supposes” … What a strange collection of words.

Therefore, these are only “attempts” to explain “some advances” that give us “at least a clue” which makes us “assume” “a theory”… In short, “we are simply guessing!”  Next, the scientific reference continues discussing in decisive terms “the events of a distant past” !!

Let us continue our analysis in order to reach the depth of this first proof of the existence of God.  At the beginning of this talk about attempts, clues, and assumptions, the scientists presuppose the existence of “our solar system”, that of “another huge star”, ” the force of gravity”, and “masses of burning gasses”.  They say that these “began to cool” then coalesced and continued revolving around the sun under the effect of its force of gravity.

What a beautiful picture of the universe!  The solar system a huge star,   definite  laws  that  do not change, all these are clear indications of a vast rational power!

Think with me; these millions of laws of heat, light, energy, motion, orbits, and gravity which require that every body should take an almost spherical shape and that it remain like that, and millions of other laws … what is the meaning of all that?

Let us examine the subject closely.  Is the issue simply understanding our solar system?  Of course not!  For the scientists say that our solar system is simply one of many such systems in the Milky Way, or the galaxy in which we live. And this is one of millions of other galaxies which in turn are only a small part of this vast universe.

A calm contemplation of scientific theories shows us that they tell of a universe “which is connected and governed by laws.”

Therefore, the existence of a law that is stable, unchangeable, and invisible but effective requires the existence of someone who put this law; “There is only one Lawgiver, who is able to save and to destroy.” (Jas. 4: 12). This Lawgiver is God.