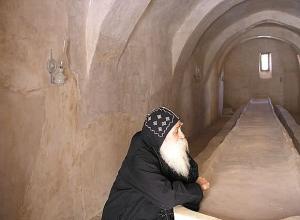 The ascetic heart is ultimately a heart of prayer. It is this heart that yearns for communion with God Most High, and will sacrifice all the world for such union. It is the heart willing to cast aside every hindrance and sinful chain that weighs down the soul from its proper dwelling place in the bosom of Christ God, that the race to obtain the prize may be fought more fully, more readily.

In prayer, the ascetic finds his home; for prayer is the union of man with God, and this the state for which humanity was created at the dawn of time. Such union, wrought by the grace of God in concert with the faithful work of man, is the only true life of the human race. Apart from it, life is but a shadow; within it, the smallest man or woman radiates more brightly than the very sun.

True prayer is not speech, nor is it discussion. These are steps along the path to true, inner prayer, but they are not the goal. Speech is forged of words, and words of finite minds, and finite minds are ultimately incapable of grasping the fullness of divine Truth. Thus words begin the ascent, provide the path which leads to the mountaintop, but cannot reach its peak.

At the height of prayer all speech must cease. The God who transcends speech energizes the human soul and body to the attainment of intimate, personal union with Himself, whence knowledge and communion are of experience and not of words. The heart of prayer communes with God not through any mediating speech or conversation, but through direct connection and communion. God lifts the ascetic to Himself in prayer, and there she comes to know God.

What a mystery is this union of prayer! How can it be that God and man, Creator and created, come together as one? Yet God is not blasphemed in such a notion; all the saints and the whole witness of the holy Church testify to this most personal of unities that is the heart of prayer. Shall we sinful men know greater truths than they? The wish of the Saviour was, and remains, that He and man might be one; in prayer, when prayer be inner and true, His wish is born a reality.

The ascetic prays, and strives to pray. Her prayer is weak, yet it leads to perfection. And this the most profound of mysteries, that prayer, the fruit and goal of all ascetic labor, stands also as that labor’s greatest tool. The perfect is attained by the imperfect, and outer, base prayer shall eventually lead to glory. Though prayer be the target, it is also the bow by which the arrow is launched to hit the mark; and so the ascetic heart prays, that it might learn to pray. His cry remains, ‘Teach us to pray. Pray within us.’

The ascetic life is summed up in prayer, and prayer is attained by the ascetic life. There can be no true prayer in a soul untrained and unprepared, thus for the call of prayer the whole world is charged to take up the ascetic walk. This walk and this heart are not reserved for a select few, for only the monastics or the clergy, or the greatest of saints; they are the charge of every human person, the call of every human life. In the midst of any station, there can the ascetic heart be fostered—there can it flourish.

It is the gift of the ascetic heart to know, truly know the world, and it is the gift of the unworthy world to possess the call to this heavenward life. It is the very source of life, for life is in God and God is in prayer; it is the upward call of Christ Jesus in a world of fallen passions; it is the charge of heaven, the life of the angels, offered to frail humanity by a loving and benevolent God. Let there then be no delay: arise, take up this yoke so deft and yet so light to bear, and find in its ultimate struggle the only true peace and rest for the human soul.