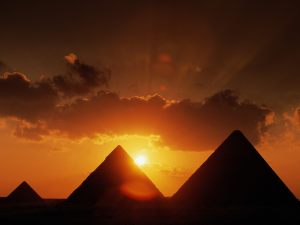 The Copts are the rightful ancestors of the ancient Egyptians.  The term “Copt” is derived from the Greek word “Aigyptos” which is in turn derived from the ancient Egyptian word “Ha-ka-Ptah” which means, the house of the spirit of Ptah, a most highly revered deity in Egyptian mythology.  Since the Arab conquest and until today, this term refers to the Christian Egyptian, distinguishing them from the Muslim Egyptian.  When the Arabs conquered Egypt in 642 A.D., all the native Egyptians were Christian.  Therefore, they called Egypt “Dar-el-Qypt” which means, the home of the Copts.

The Copts are the direct descendants of the ancient Egyptians or the “modern sons of the pharaohs” and the Coptic Orthodox Church is the indigenous Church of Egypt. They played an essential role in the whole Christian world, especially during the first five centuries.

Blessed is Egypt My People

Egypt was a refuge to many people especially during famines. Among those who found refuge in Egypt were: Abraham and Sarah, Joseph (who became its second man in command after pharaoh), Jacob and his sons who grew in Egypt as a nation, Moses the great prophet and his brother Aaron the first priest.  The Bible talks about Moses saying: “Moses was taught in all the wisdom of the Egyptians and was mighty in words and in deeds.” Also, among the prophets who visited Egypt was Jeremiah who uttered his last prophecy there.

Finally, it was visited by the Holy Family.  Egypt was the only country in the world that our Lord visited. Thus, Egypt became a representative of the Gentiles to whom Christ came to establish His Church and to form His new people.  The prophets Hosea and Isaiah both prophesied about the Son of God going out of Bethlehem and fleeing to Egypt.

Isaiah said, “Behold, the Lord rides upon a swift cloud, and will come into Egypt; and the idols of Egypt will totter at His presence…  In that day there will be an alter to the Lord in the midst of the land of Egypt, and a pillar to the Lord at its border.”

St. Cyril the Great interpreted this prophecy saying, “The swift cloud which carried the Child Jesus to Egypt was His mother, St. Mary, who surpassed the cloud in purity.  The alter which was established in the midst of the land of Egypt is the Christian Church which had replaced the temples of paganism as the idols collapsed and the temples were deserted in the presence of the Lord Jesus.”  Through Isaiah, later in the chapter we hear the Lord proclaiming, “Blessed is Egypt, My people.”  Many miracles took place there during that visit and many places were blessed.  At these holy places, many churches and monasteries were built, which are visited by people from all over the world. Thus Jesus Christ came during His childhood to Egypt to lay by Himself the foundation stone of His Church in Egypt.

One thought on “Who are the Copts? Part 1”