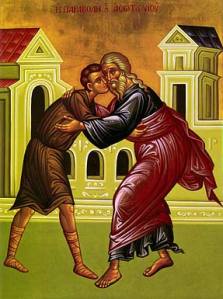 The name for this Sunday is taken from the parable of our Lord Jesus Christ found in Luke 15:11-32. The parable is the story of a man and his two sons. The youngest of the sons asks his father to give him his inheritance.

The father does this, and soon after the son leaves and journeys to a distant country (vv. 11-13). After the younger son arrives, he squanders all of his possessions with “prodigal” living. Within a short period of time, he wastes everything.

A severe famine comes, but he has nothing and falls into great need (vv. 13-14). He is able to find work feeding swine, but this does not improve his situation. The Scriptures say, “He would gladly have filled his stomach with the pods that the swine ate, but no one gave him anything” (vv. 15-16). The parable says that in the midst of his dire conditions, he came to himself.

He realized that his father’s hired servants have enough to eat and food to spare, while he perishes with hunger. He says, “I will arise and go to my father and will say to him, ‘Father, I have sinned against heaven and before you, and I am no longer worthy to be called your son. Make me like one of your hired servants’” (vv. 17-19). He arose and returned to his father.

But as he approached, his father saw him at a great distance. The father had compassion on his son, ran to meet him, embraced him, and kissed him. The son admitted his sinfulness and his unworthiness to be called a son, but in his joy at the return of his son, the father called his servants to bring the best robe, a ring for his son’s finger, and sandals for his feet. He also called for the fatted calf to be killed for a feast. He exclaimed, “For this my son was dead and is alive again; he was lost and is found” (vv. 20-24).

While they were feasting and celebrating the return of the prodigal son, the older son comes and inquires about what is happening. He is told that his brother had returned and that his father has received him with a feast. The older brother becomes angry and will not go in to the feast. The father comes out and pleads with him, but the older son answers by saying he has been faithful to his father for many years and yet the father never gave him the opportunity for such feasting. He expresses his anger and jealousy over his brother who was received in such a manner after he squandered his inheritance (vv. 25-30).

The father responds by telling his oldest son, “You are always with me, and all that I have is yours. It was right that we should make merry and be glad, for your brother was dead and is alive again, and was lost and is found” (vv. 31-32).

The parable of the Prodigal Son forms an exact icon of repentance at its different stages. Sin is exile, enslavement to strangers, hunger. Repentance is the return from exile to our true home; it is to receive back our inheritance and freedom in the Father’s house. But repentance implies action: “I will rise up and go…” (v. 18). To repent is not just to feel dissatisfied, but to make a decision and to act upon it. In the words of our Lord, we also learn of three things through this parable: the condition of the sinner, the rule of repentance, and the greatness of God’s compassion.

The reading of this parable follows the Sunday of the Publican and the Pharisee so that, seeing in the person of the Prodigal Son our own sinful condition, we might come to our senses and return to God through repentance. For those who have fallen into great despair over their sins thinking that there is no forgiveness, this parable offers hope. The Heavenly Father is patiently and lovingly waiting for our return.

There is no sin that can overcome His love for us. Finally, this parable offers us insight into the world in which we live. It is a world where the activities of people are disconnected and not ordered toward the fulfillment of God’s divine purpose for life. It is a world of incoherent pursuits, of illusory strivings, of craving for foods and drinks that do not satisfy, a world where nothing ultimately makes sense, and a world engulfed in untruth, deceit and sin. It is the exact opposite of the world as created by God and potentially recreated by his Son and Spirit. There is no cure for the evils of our age unless we return to God.

The world in which we live is not a normal world, but a wasteland. This is why in the Slavic tradition of the Orthodox Church the reading of Psalm 137 is added to the Matins service for this and the the following two Sundays. This nostalgic lament of the Hebrew exiles states: “By the streams of Babylon we sat and wept as we remembered Zion. On the willows we hung our harps, for how could we sing the Lord’s song in a strange land” (Psalm 137).

Here we can see the challenge of life in this world and the alienation from God that can happen when sin reigns in our lives. As a result of sin in our lives, we lose the joy of communion with God, we defile and lose our spiritual beauty, and we find ourselves far away from our real home, our real life. In true repentance, we realize this, and we express a deep desire to return, to recover what has been lost.

On this day the Church reminds us of what we have abandoned and lost, and beckons us to find the desire and power to return. Our Heavenly Father is waiting and ready to receive us with His loving forgiveness and His saving embrace.