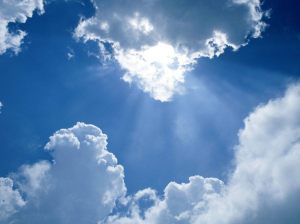 I think, brethren, that the souls which draw near to the love of God are of three sorts, be they male or female.

There are those who are called by the law of love which is in their nature, and which original good implanted in them at their first creation. The word of God came to them, and they doubted not at all but followed it readily, like Abraham the Patriarch: for when God saw that it was not from the teaching of men that he had learnt to love God, but from the law implanted in the nature of his first compacting, God appeared to him and said, ‘Get thee out from thy country and from thy kindred and from thy father’s house, unto a land that I will show thee.’ (Gen. 12:1)

And he went nothing doubting, but was ready for his calling. He is the pattern of this approach, which still persists in those who follow in his footsteps. Toiling and seeking the fear of God in patience and quiet, they achieve the true manner of life, because their souls are ready to follow the love of God. This is the first kind of calling.

The second calling is this. There are men who hear the written Law testifying of pains and torments prepared for the wicked, and of the promises prepared for those who walk worthily in the fear of God; and by the testimony of the written Law their thoughts are roused up to seek to enter into the calling, as David testifies when he says: ‘The law of the Lord is undefiled, converting the soul: the testimony of the Lord is sure, and giveth wisdom unto the simple.’ (Ps. 19:7) And in another place he says, ‘The opening of thy words giveth light and understanding unto the simple’ (Ps. 119:130); and much else, all of which we cannot mention now.

The third calling is this. There are souls which at first were hard of heart and persisted in the works of sin; and somehow the good God in his mercy sends upon such souls the chastisement of affliction, till they grow weary, and come to their senses, and are converted, and draw near, and enter into knowledge, and repent with all their heart, and they also attain the true manner of life, like those others of whom we have already spoken.

These are the three approaches by which souls come to repentance, till they attain to the grace and calling of the Son of God.